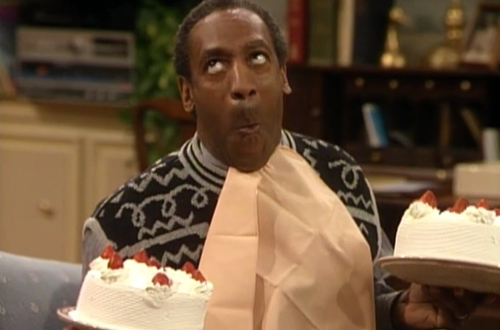 I was disappointed that Bill never became my mentor. I have heard many stories of Bill’s generosity, of his taking time to offer advice and council. I wish I had one of those stories. However, it was interesting that as I thought about it, the people I knew for whom the offer of mentoring came all had one thing in common – they were beautiful women. And if I knew anything about Bill it was that he loved beautiful women. If that is what it took, no wonder he wasn’t returning my calls.

There always seemed to be a bevy of young beautiful women around the set. They would march in by twos or threes, take a seat in the stands, watch rehearsal for a bit and then leave with Bill. On the set, it was referred to as “The Parade.” I was always curious about what these women were doing. I assumed they were auditioning, but they never seemed to make it on the show. And then there was Susan.

I always wondered if Bill wanted Susan, if for no other reason that every man seemed to want her. Susan was the kind of woman who turned heads. However, I was also suspicious because Bill had made a bet with her concerning her hair. Susan had beautiful thick hair and Bill promised her that he would give her $500 if she didn’t cut her hair for a year.  When she told me about the  bet, I raised an eyebrow. Then she told me that she’d had dinner at his home. My mouth dropped. What the hell? Susan never hinted that anything untoward happened. Still, why would Bill Cosby have a pretty young assistant in the production office to his home for dinner? If he hadn’t tried to get with her, I was certain he was licking his chops. If Susan was speaking to me, I would ask.

It seemed to be common knowledge that Bill played around. When I say common knowledge, I mean that it was just something that people seemed to know without anyone saying anything. Bill sleeping around was a “fact” that, like, the air, seemed to just be: You didn’t have to see it or hear it to know that it existed. People said things to me as if they had first-hand knowledge, and maybe they did. I suspect however, that rather than eyewitness testimony, what they had was the same thing that I had: speculation and gossip.  I love dish as much as the next person, but I do prefer to see with my own eyes.

I also know that men who are wealthy and powerful are always the target of gossip, lies, and slander. Hell, you don’t even have to be wealthy, powerful, or good looking. The truth is that people will lie about you just because they are bored!

Still, it would not have surprised me. I don’t say that to cast aspersions on Bill’s character. I say it only because I think it would be extremely difficult for any rich, powerful man to say, “No” every single time a woman threw herself at him. I was a scrub and the opportunities for sex that were tossed my way were numerous. I suspect that if I had been really famous and extremely wealthy, the opportunities would have increased exponentially, as would’ve my participation. Does any man have the fortitude to turn nookie down every single time? Some, perhaps.  I don’t think many.

I actually recall having this conversation with the redhead early on in our relationship. It was October of my first season, and I was filling in for an actor in an off-Broadway play.  The actor playing the part had been arrested for attempting to buy crack from an undercover officer and was lost in the bowels of the New York City jail system. As the saying goes, “the show must go on,” so, Friday morning, I received a phone call asking if I could be ready to go onstage that night. I caught the train into the city; read the script, or most of it anyway; had the costume fitted to me, (the actor I was filling in for was both taller and heavier); got my blocking from the stage-manager; ran through my scenes with the cast; got a short break for dinner and went on that night. Saturday, I had scheduled a date with the redhead, so she came to watch me in that evening’s performance. Afterwards, we held hands as we walked to Greenwich Village to listen to some music. We had been dating for about a month and had shared a couple of very romantic New York moments together, kissing in Central Park and the like. I was feeling quite heroic after my performance and was looking forward to a special evening – which no doubt explains why I chose to blather on about how I just felt that no famous man could say no every time easy sex was offered. I have a horrible habit of saying really stupid things to women when trying to date them.

The truth is, however, that I believe that some women who are married to prominent men strike a deal with themselves. They believe that, for men, the act of sex is removed from love. The bargain they make is that as long as their husbands continue to bring home the checks and don’t bring home any babies or diseases, they will overlook any dalliances. As the redhead and I made our way downtown, I shared all of this theorizing. I am certain that she felt I was somehow hinting that if she was going to be with me, that she would have to strike a similar deal. Needless to say, she wasn’t having it. At some point she dropped my hand and got very quiet. I got the hint and began the delicate work of getting the evening back on track. Of course, that didn’t change the fact that I believed what I was saying then and still do.

So, assuming, for the sake of argument, that Bill was cheating on Camille, I am fairly certain Camille knew. Hey, if everyone who claimed to know actually knew, then certainly Camille knew, and had long ago made her peace with it. At any rate, it was none of my business. I never saw Bill engage in any inappropriate behavior, so all I have is the same gossip as everyone else.

Previous Article BILL AND MY SENSE OF SMELL
Next Article IS HE GUILTY?